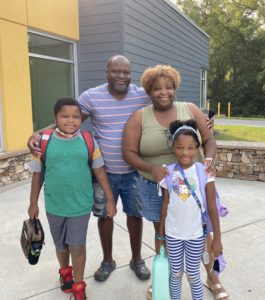 I became interested in the school many years ago when I started my family. I had begun delving deeper into research regarding what successfully existed globally based on the personal criteria I held. My personal criteria were heavily influenced by both my experience teaching in alternative education and my gut reaction to the state of affairs in public education. So naturally (when the time came), The Circle School was on my radar. By the time my children were of age to attend, I had researched the school heavily, and we had visited and toured several times. As soon as it became financially doable, we took the steps to enroll our two children. In fact, we made it an urgent priority to fit the school into our budget after experiencing the effects of the public school system on our son. Our children have been with The Circle School for going on three years now.

My friends and family joke that I am a “researcher.” I do my homework once my interest is piqued about a thing. So naturally, I spent several years reading up on the school. And as anyone who knows me knows, I am passionate about my children, and also about being an educator (in a school setting or otherwise… mainly otherwise). It was important to me that my children be educated within the same vein as they were being raised. That is to say, that they were free to be themselves while being provided a relative “scaffolding” of support in so doing. My research led me to Finland by way of the internet. I was extremely taken with not only the ways in which “schooling” was delivered but also with the documented results of their techniques and practices. Then, I was very focused on my children being able to compete globally. Now, my focus and intention is that my children be able to fully and authentically contribute, globally… whatever that path looks like for them. Their relationship with themselves and how that connects with their relationships and responsibilities to/within a community is something I value greatly. However, I view my intention as their parent is to not control, but allow this to unfold. And because much of their day would be spent at school, it became and remains imperative that the school we chose for them was in alignment with these values and practices.

I became an educator by chance. To be clear, I professionally became an educator by chance. I believe it has been my purpose (and gift) since childhood to show up in the world as an educator or student in some way. Despite being enrolled in a mechanical engineering program at Drexel University in my late teens and early twenties, I spent many seasonal breaks working and volunteering for Girls Inc in the Harrisburg PA area. I did this in addition to (and at times rather than) interning as an engineer. So I have a fairly clear understanding of what the current educational system has to offer. And it was not in alignment with our intentions.

Our concerns were validated when we enrolled our oldest, our son Jaxon, into public school. The choice was more of perceived financial and circumstantial necessity at the time. We were sold on The Circle School after our first tour. We met Jim and Ellen and some other staff. And the children’s father joined via video chat (as he was away working). What struck me the most was the culture of the place. The energy of the place was palpable. My daughter Journy (only two years old at the time) said, as she sat in the lobby waiting for the tour to begin, “I feel so peaceful here Mommy.” As did I. And there was an instant awareness of connection between my kids and the staff and the environment. My children, who are very out-going and assertive and unique, were not being asked to conform or repress themselves in any way. And their “cuteness” while appreciated was not hailed as an attribute upon which they should come to rely. Our second visit came about 2-1/2 years later. During that time in between, I had continued to homeschool them until Jaxon was ready for Kindergarten.

As I’d mentioned, we had enrolled him in a reputable public school and Kindergarten program. And by all accounts our son was beyond prepared for school there academically. And I, as you can imagine, was a very involved parent. And yet as the weeks passed, I noticed that my son’s light was beginning to go out. It broke my heart to the extent that I felt it abusive for me to knowingly continue to subject him to the environment. And after two weeks of seeking creative “resolutions” and watching him bend and shape his insides to accommodate towing the line like a “good boy,” that was it for me. I called the school and removed him immediately. That same day their father and I spoke about it and scheduled our next Circle School visit. We then CREATED the space we needed in our budget and circumstances for them to attend. It was that important. And it has been an honor, a pleasure and a blessing for them to be members of this Circle School family.

I have learned over the years that authenticity and self-awareness are so invaluable to being able to show up in the world whole and peaceful and useful. And then I became a teacher. And then I became a parent. And at the risk of sounding eccentric, I am truly not passionate about too much other than being a conduit for that ideal these days. And at the risk of sounding selfish, one of the crucial experiences that has grown me greatly is being a student to the relationship between myself and the children in my life. And I thank the Creator for this Circle School community. It has become an extension of our family. Even the kids’ grandparents are fully invested. My children have had the luxury of BE-ing over doing. That is priceless. I feel as if our home and the school are in partnership and work in tandem in the raising of our kids… and quite frankly the elevation of ourselves as parents and people as well.

Thanks for the listen.

← Older: No, Kids Don't Rule the School
Newer: From Founding Furnace to Post-Curricular →