No, Kids Don’t Rule the School At first glance, you might get the wrong idea from the title of my book, When Kids Rule the School. You might think kids are in charge in some sort of absolute way. It’s not that simple.

The publishers didn’t like my working title: “Kids Practicing Life,” which I have to admit is dull. My subtitle was lame, too: “Inside self-directed democratic schooling.” Theirs is so much better, they even put it in all caps: THE POWER AND PROMISE OF DEMOCRATIC EDUCATION. (Yes, that IS a good representation of the book and the school.)

In reality, the “kids rule” title is a bit true, a bit provocative, and a bit misleading. The publisher titled the book using a common marketing technique: take a sensational aspect of the subject and boil it down to hype it up. The “sensational aspect” is that kids have a decisive say about what they do at school and a substantial say in school governance. Yes, that IS sensational. It’s also true, even if the title is a bit overblown.

I guess it’s misleading if you read the title but not the book. You might imagine that kids are on their own to run the school. Or that kids in charge would make foolish or irresponsible governing decisions.

So now I want to clarify two things. First, kids do not “rule the school” as that phrase might suggest. They don’t swing from the rafters or lock the adults in closets. Second, their “reign” over the school is shared with adults and limited to certain boundaries.

The school says it operates as a scaled down version of the larger world, and students are citizens in that world. That seems about right to me. Kids “rule the school” in about the same way that I “rule the city” where I live.

In truth, I don’t feel much governing authority over my city. I can vote to elect officials. I can lobby them to do what I want. I can challenge their actions in court. I can even run for election. I might not get elected or get my way, but I’m free to try. If I want to erect or remove a statue in a public park, or ban sugary drinks, or decide what color to paint the mayor’s office, it will probably take a long time and lots of effort, and maybe it just won’t happen. Or, if it does, my original idea will probably be twisted into something very different by the time everyone else has a say. Just so, for students in democratic schools.

I could get more involved in city government if I wanted to. But, like most people, if government is “good enough” — if I can live my life and pursue my interests — then I probably won’t get involved. I don’t care about the color of the mayor’s office, and I can always speak up at a public meeting if I do care enough about something.

I think that’s about how it is for many students in democratic schools most of the time. They choose what they’ll do at school — each moment of each day, with whom, where, and for how long. If you follow the rules, do your civic duties (like housekeeping chores, fire drills, and jury duty), and don’t interfere with others’ freedom, then you’re free to pursue your own interests. You might make a cardboard spinning wheel, write a graduation speech, build a rocket, plan an incredible field trip, start a math class, run a business, or hang out with friends. Life, liberty, and pursuit of happiness!

Getting government to do or allow something — city or school — can be easy or hard. When 10-year-old Noah wanted to bring his dog “Jasper” to school, he knew what he’d have to do and it went smoothly: appearances at two weekly sessions of School Meeting (that’s students and staff) and then a vote to allow a two-hour leashed visit outdoors in a designated area, along with a couple other conditions. Jasper visited as planned, didn’t bite anyone, didn’t stir up anyone’s allergies, and citizen Noah got his government to do what he wanted.

But when Lily’s Cool Things Outside Corporation (like a club, sort of) wanted to erect a swingset on the school’s new campus, it was another story. School government had dealt with many pet visits in the past, but the swingset project presented many firsts and exceptional disagreement about how to proceed. The swingset eventually arrived with fanfare and celebration, and is well used. But it wouldn’t have happened without unusual determination and perseverance. 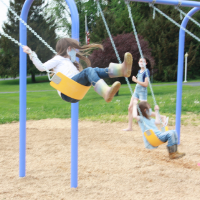 The swingset project ran into all four of the ever-present forces that limit what school government can do, like state and federal laws limit what a city can do. First, there’s public regulation of education, health, safety, facilities, finances, and more. Second, for ongoing viability, the school must be sensitive and responsive to the school’s market — primarily parents. Third, the school’s own constitution (bylaws) lays out its mission, democratic structure, and essential principles — something like the U.S. Constitution and Bill of Rights. Fourth, the school’s board of trustees establishes policies, such as requiring that spending doesn’t exceed income. Together, these imposed constraints draw hard boundaries.

A sensational part of democratic schools is, indeed, the engagement of students in school governance, with true democratic authority. But no, kids don’t “rule the school” absolutely or unilaterally. They share the privilege, opportunity, and responsibility with others, growing up in the bounded freedom of democratic society.