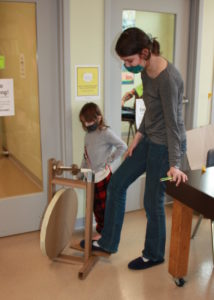 Sometime back in March, I made a cardboard spinning wheel at school. If any of you are wondering what type of school I go to where I can make a spinning wheel out of cardboard, it’s called The Circle School, and it’s a self-directed democratic school in Harrisburg, Pennsylvania. It’s a pretty interesting school, and if you’ve never heard of it, I recommend checking it out. Anyways, one day at school, I was talking with some of the staff members about the mechanics of spinning wheels and fiber, and showing them a book I had that explained the basics of spinning, and the thought came up of making a spinning wheel. I don’t remember the entirety of the conversation, but I somehow landed on the idea of a cardboard spinning wheel.

I’m guessing many of you are thinking something along the lines of “A cardboard spinning wheel?!? That would never work!” and I’m guessing that’s what the staff members I was talking to might have been thinking, but I was too busy picturing the Louet S10 I was borrowing from a friend to be thinking silly things like that. I said something like “You know, that might actually work!” and pretty quickly got down to business.

I spent probably the next three school days in the Mommy Pod (The Circle School’s joint art and science room). I canceled classes and meetings and completely focused on my crazy idea. I covered the floor in pieces of cardboard. I think I forgot to eat lunch until I got home on at least two days. I don’t know what everyone else was thinking, but the staff helped me when I came with requests of cutting things out with X-acto knives, or cutting a piece of PVC to this length, and drilling a hole there, and oh I need a couple of washers, and that piece of PVC was the wrong length, can we try again?

After many hours, a lot of cardboard and hot glue, three pieces of PVC, an unsharpened pencil, some sturdy wire, a bag of rubber bands, a handful of washers, some duck tape, masking tape, and a bit more hot glue, plus some string, and a bunch of random pieces of hardware, I had the cardboard spinning wheel you see pictured. 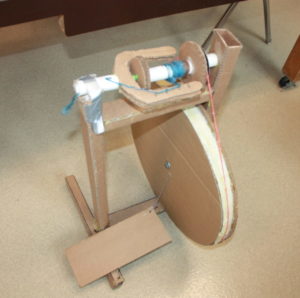 Does it work? Very nearly almost… but not quite. Do I think I could make a functioning spinning wheel out of cardboard and a couple other random things? Yes. The wheel came amazingly close to working. It did work, with a lot of encouragement, and not for more than three seconds at a time. And I could identify the main problems, and there were only three of them. If I could fix those things, I do honestly think it might work. Not great by any means, I would not want to do large amounts of spinning on it, and I’m sure it would be far from sturdy, but I do think it would be capable of spinning yarn.

I’d like to try again at some point, but not today. I’ve started looking at a new idea. My cardboard spinning wheel was a great prototype, and now I’m exploring following the same basic design using wood. All three of my main problems arose mostly from the fact that it’s made out of cardboard and I used only what I could easily find. I’m planning on being a bit less cheap with my wooden one. I’ve already started working on it at school, though I’ll have to wait until fall to make much more progress. Maybe it will never work quite as well as a commercially made wheel, but I do think it will be plenty good for me to use. And, I’ll be able to say I made it! How cool is that? However it goes, I’m extremely excited about getting back to work in the fall. I wouldn’t be surprised if you eventually hear more about it, once I’m done.

I think the whole project highlights a lot of what I love most about The Circle School. How you can follow your ideas, for a day, a week, a year, or a lifetime. Maybe they’re a little crazy, the type of thing people look at and say “that would never work.” And maybe they don’t work. But you learn. Maybe you don’t learn social studies and algebra and reading, but you learn how to try, how to experiment, how to fail, and try again. And maybe, at the end of your journey on one idea, you’re led on to something new. I’m excited to be going back to school at the end of the month and diving right into trying new things, messing up new things, and learning new things. Hopefully, I’ll see some of you there.