My mom is great. When Graham was a newborn, she used to arrive at my house late in the morning, bringing lunch for us and a basket of washed, folded baby clothes. She’d admire Graham, and we’d eat lunch together. Then she would do all the dishes, including the ones from dinner the night before, while I nursed the baby. After that, she would shoo me away to my bedroom for a nap while she rocked Graham to sleep—not an easy task, since he had colic and was very determined to stay awake. She’d finally get him to sleep and into his bassinet, and then would tiptoe out, carrying a little basket containing Graham’s dirty clothes from the day before. Is that a fantastic grandmother or what? Also, she was endlessly fascinated by all things baby—we could sit and admire my miraculous, amazing boy for what seemed like hours. She was even supportive when she didn’t want to be. For example, she always supported my breastfeeding him through toddlerhood, even when she ached to give him a bottle. As Graham grew, and we added John to our family, my mother always was focused on the boys’ happiness. She sat through dreadful kids’ movies and endless Pokémon talk (things I had little patience for) because that’s what made them happy. If I had been able to order the perfect grandmother directly from heaven, I couldn’t possibly have done better.

Both my parents were big believers in formal education. They met in college, where they were both preparing to be English teachers. My mother taught English in public school for her entire career, while my father started there and then picked up a PhD. and a career as a writer and English professor. So when I announced that I’d be homeschooling the boys (before we moved to the Harrisburg area), they were a little uneasy, but mostly okay. After all, the boys were still small, and Graham could read by age four. Also, the tiny rural school district where we lived was impoverished, and my parents must have reassured themselves that I couldn’t do much worse at home than was being done in those beleaguered elementary classrooms. It didn’t take long until both of my folks, but especially my mother, were completely supportive of my homeschooling. 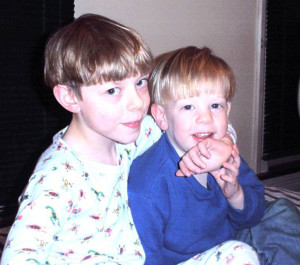 Graham and John, many moons ago.

Then we planned to move to this area, and a big part of the plan was enrolling Graham and John in The Circle School. My parents were concerned, pretty deeply concerned, when they heard what Circle School was all about. No required classes at all? Everybody all mixed together? Kids doing what they wanted all day long? How would this work? How would they ever learn Math or Science if no one made them learn it? (It’s interesting that two English teachers never showed even a whisper of a worry about how kids would learn to write a paragraph or appreciate poetry at TCS.) I tried to explain. Learning is the human condition, I said. Learning is pleasurable, in and of itself. If a person is never forced to learn, never made to memorize things he doesn’t care about or isn’t ready for, then he will learn in his own time and his own way. Read John Taylor Gatto, I said, knowing full well that the way to win an argument with English teachers was to tell them to go read something. It didn’t work. They asked the big question. What about college? This all sounds fine, talking big ideas about education around the dinner table, but what about when it comes time to apply to college? I told them about the overwhelming majority of Circle School students who go on to college.

I must say, they still didn’t really buy it, but they were supportive of our parenting in general, so they let it go. They wanted to believe that everything would be okay, that their grandsons wouldn’t have to resort to careers as ditch-diggers, and so both my parents supported our choice. I could tell that they still had some pretty serious reservations, but not because of what they said to me. Both of them, but mostly my father, began to occasionally quiz the boys to find out what they knew about different subjects. That didn’t go very well. Neither of the boys was used to being quizzed, and they couldn’t quite grasp why their grandfather was asking questions he already knew the answers to. Graham and John were clearly happy at school. My parents were there when the boys complained that summer was too long and that school should be open all year. This went over big with two teachers, though it didn’t allay their academic concerns. Mostly, we didn’t talk about school, and that was okay with everyone.

Then John turned seven in the spring of his second year at TCS. We had a party for him at a bowling alley, and invited a bunch of his friends from school and a neighbor boy, Donny. My mother also came to the party. It went well. During the bowling, there was some friendly competition, but mostly the kids encouraged each other. Donny didn’t want to bowl at first, but between the entreaties of his mother and the other kids, he eventually joined the fun. A toddler sister of one of the guests was in a full-leg cast, and most of the kids spent a bit of time with her, charmed by the baby who was stumping around as fast as she could. When it was time for cake, the kids very quickly changed their shoes, turned in their bowling shoes, and sat around the table—except for Donny. His mother put on his shoes for him and returned the rented shoes to the counter. Once the cake was eaten, I said—once—let’s clean up so we can do presents, and the kids good-naturedly cleared away their paper plates and threw them away, so fast I could hardly believe it. Donny’s mom threw his plate away. When it was time to go, again, the kids cleaned up stray wrapping paper and ribbons, this time without being asked.

On the way home in the car, my mother couldn’t stop exclaiming. Those kids were so good, she said. They cleaned up; they played nicely together! They were so mature. They’re practically self-sufficient! Then she was quiet for a few minutes, while John talked about his gifts and how much fun he’d had. Then my mom said, maybe there’s something to this Circle School after all. Graham, John, and grandmother more recently. This editor could use a beach right now.

Since then, she has been much more at ease with the choice of TCS. I won’t say that she is 100% on board, because she worries that they don’t know the same things as other kids their age, and if we had to move, they couldn’t easily transition to public school. Which may be true. I must confess that I myself have the occasional bout of Academic Panic: They don’t know that Pickett’s Charge was the high-water mark of the Confederacy! They don’t know “Stopping by Woods on a Snowy Evening!” But those panicky moments are rare, for my mom and for me. I’m sure most public-school parents also worry about what their kids aren’t learning. And I remind myself about all the many things I’m not worried about. I don’t have to wonder if my kids are safe at school. I don’t have to worry that their love of learning is being drilled out of them. And I certainly don’t have to worry that a teacher might make them feel stupid or worthless because they don’t know something.

I’ve heard many times from other TCS parents that the grandparents are critical of the school. My advice would be to bring the grandparents to school events as often as you can. Let them see for themselves what the school is like. Part of my own mother’s discomfort was based on unfamiliarity with the whole concept of democratic education. Once she knew more, and especially, once she had experienced what TCS is really about for herself, she became much more supportive. She is still the grandmother I ordered straight from heaven, putting her grandchildren’s happiness above everything. She can see how intensely happy the boys are in the TCS community, and how they are thriving there, and that has made all the difference in the world.

← Older: A History of Snow
Newer: All About Anarchy →