If I’m being honest, it wasn’t anarchy, but something more akin to libertarianism. The rules weren’t really gone, but School Meeting voted to suspend enforcement of any victimless violations. And not even all of the rules were gone — those about campus boundaries, restricted zones, and property damage were still in effect.

Gone, though, were rules about running, noise, riding skateboards and scooters inside, sitting on tables (and refrigerators) and more.

The School Meeting Chair rang the bell at 10am to signal the start of the hour. Immediately, a loud cry went up as a group gathered in the kitchen all SCREAMED at once. Running commenced, through the hallways, through the kitchen, up the stairs, down the stairs, all around the building. Lights were turned off, and music turned up. Scooters and skateboards came out in Room 1A, the Library, and the hallways. People climbed onto the counters, and unpacked their lunches in the Conference Room and the back hallways. Mayhem, and the exhilaration of freedom.

At first I thought, “They can’t possibly keep this up for an hour.” I was wrong. No one seemed to get tired. The cacophony continued for the full hour, culminating in a group scream to bookend the hour as the bell rang to signal its end. It was exhausting. 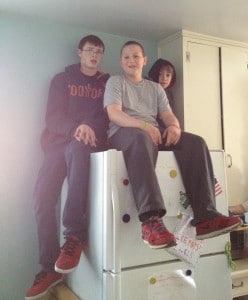 I don’t actually think we have a rule that specifically addresses sitting on the refrigerator, except that it looks like they must have gotten their shoes on the kitchen booth to get up there.

The rules about property damage and doing harm to others were still in effect, yes, but the sheer wild and reckless energy of the hour made me nervous nonetheless. My least favorite moment of the hour was when I snapped at a friend because I was concerned he wasn’t being careful enough with the smaller people around him. That wouldn’t have happened under the normal rules, because I wouldn’t have been worried about people getting carried away and out of control, and because I’d trust that the JC could handle it just fine later.

And yet, it seems like maybe I needn’t have worried. I’m not aware of any damage having been done, and the only injury I heard about occurred while someone was rearranging the books on the library shelves — an always-legal activity. Despite the wildness, no one lost control — not even of their skateboard — to an extent that caused any harm.

After it was all over, a group of kids went around surveying people as to whether or not they’d support doing it again, or making “no rules Friday” a regular thing. Not only do I think I would support it, but I was so impressed at how well students (and staff) balanced their increased freedom with responsibility today, I might be tempted to see what else we can do away with.

Below are some of my favorite pictures from The Hour. What would you do during an hour of no rules? All rules remained in effect in the Playroom, but it didn’t get much use. 2451.01‐SM Music Studio certificaton & rules: School Meeting members must be certified by the Music Corporation to enter the music studio. You must indicate your presence in the music studio in the appropriate place by the back door. The music studio may only be used for activities directly related to the production or practice of music. Dancing and hanging out are violations of this rule. You’re supposed to be certified to hang out with Seymore. On the shelf above the back hall closet. Again, I’m not sure exactly what rule this would break. This should be obvious, but other than that he’s not wearing a helmet and other protective gear, I can’t find a rule against riding a scooter inside. What?!?! And then the ball rang, and it was back to life as normal. For now?