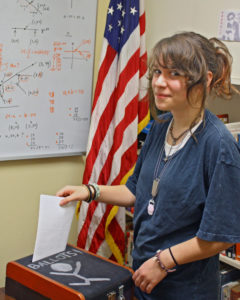 I’m disappointed by America’s dysfunctional politics. And I bet you are, too. What really gets to me is the hyper-polarization and aggressive non-cooperation. I want to yell “Grow up, America!” — but that might be insulting to the kids I work with.

For me it’s personal because I know how America can grow up in two steps. First, turn schools into working democracies. Second, wait a generation. (Well, I didn’t say it would be quick.) Immerse kids in a self-governed society for 12 years and they’ll emerge knowing how to work stuff out with people who see the world very differently. They’ll have “cultural intelligence.”

Hear me out. Whatever your political tribe, I’ll tell you what’s wrong with the other team’s thinking and what’s right about yours. And heads up, I’m also going to mention what’s right about the other team’s thinking and what’s wrong with yours. Okay, yes, that’s a gutsy claim. But I’m not running for office and not asking for your vote. Just asking for your open mind for a few minutes.

First, more about schools as working democracies. I’m not making this up. I’ve worked in a democratic school for 37 years, I’m in daily communication with dozens of others, and I’ve written a book about it. I’ve seen how our graduates live fulfilling lives engaged in the world and practiced at working out thorny issues in thickets of disagreement. They have cultural intelligence.

In democratic schools (that’s a little d, not the capital D of the political party) students vote and legislate (yes, make laws) in a scaled-down version of America. Kids aren’t sorted by age into isolated classrooms. Instead, people of all ages share one community, one set of resources, and one government — even though the needs and perspectives of young children are very different from those of older children, and different again from those of teenagers. The stakes are real. Students and teachers together make the rules by majority vote. It’s not a game and teachers don’t get a veto. Personal liberty, rule of law, due process, trial by jury, freedom of speech, and so on: it’s all there, reflecting beautiful American ideals — and, yes, flawed application by imperfect human beings in messy life.

Crazy idea, you think, having kids decide important stuff? But is it crazier than the daily news? What’s crazy is that whichever political party is in power, they want to ram through their best and worst ideas. And whichever party is out of power, they want to oppose everything, automatically. Both parties try to make the other look bad. Grow up, America! We can be better! We need more cultural intelligence and kids who grow up with it in school.

Now about those political tribes — cultural tribes, really, or “worldviews,” three of them, each striving to dominate, and spread across the familiar left-right spectrum: Progressive, Modern, Traditional. Each developed historically and each pioneered some enduring values that most Americans can agree on. Each also developed some bad habits. With a bit of cultural intelligence, we can see that each has something good to offer, and each has a nasty side, too.

What? You don’t believe the part about most Americans can agree? Okay, maybe I’m wrong, but consider the three most common ways of seeing the world, in the historical order of their emergence — Traditional, Modern, Progressive — and take a deep breath when we get to the nasty side of your own favorite worldview.

The Traditional worldview, perhaps exemplified by Billy Graham, highly values duty, honor, faith, family, homeland, law and order. What’s not to like? These are enduring values with ancient roots, worthy and solidly grounding America still today. On the other hand, the Traditional worldview has spawned racism, sexism, bigotry, oppressive authoritarianism, anti-science, hostility to other views, and isolating tribalism. Nasty indeed.

The Modern worldview, perhaps exemplified by Milton Friedman, values science, reason, evidence, individual liberty, rule of law, economic progress, upward mobility, meritocracy. These, too, are important foundations of American life today (the need for improvement notwithstanding) and have brought dramatic advances in quality of life. On the other hand, the Modern worldview has produced its own excesses: environmental degradation, systemic racism, inequality, materialism, greedy capitalism, and hostility to Traditional. Ouch.

The Progressive (or postmodern) worldview, perhaps exemplified by Elizabeth Warren, values the natural environment, planetary healing, social justice, multiculturalism, universal morality — a whole new level of care and sensitivity, worthy of widespread application for a better world. Wouldn’t we all agree? On the other hand, this newest of the major worldviews, still growing into maturity, at its worst also brings anti-modernism, anti-science, reverse patriotism, moral relativism, identity politics, narcissism, tyrannical demands, hostility to other views, and isolating tribalism.

Is it any wonder we are so split apart.

Like the larger world, democratic schools are layered with worldviews — based on stages of maturity rather than cultural tribes, but posing the same kind of challenges. School rules and policies are forged in public dialogue, striving to rise above differing needs, wants, and abilities, while honoring foundation values and sustaining the school’s viability. Every week, students and staff collaborate and debate to find new solutions to new problems.

We call it “practicing life” — kids figuring out how to live fulfilling lives, responsible for self and community, engaged with people who often don’t think as they do. Ideally, it’s not about compromise. It’s about understanding differences — cultural, social, economic, personal — and looking for ways to honor the true part of each viewpoint while leaving the rest behind.

America can grow up. Kids can lead the way.

NOTE: For more about cultural intelligence, I highly recommend the book Developmental Politics: How America Can Grow Into a Better Version of Itself by Steve McIntosh, from which I’ve drawn for this post, and the Institute for Cultural Evolution. For more about democratic schooling, I recommend my own book When Kids Rule the School: The Power and Promise of Democratic Education.