I walked into my new life 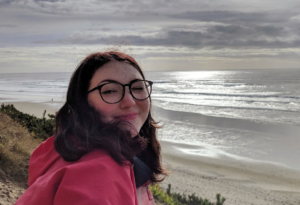 Caity on the west coast

When I first heard about The Circle School, I didn’t know what to think of this strange place where there’s hardly anything resembling “normal school.” I was petrified, and thought I wouldn’t be able to get anything done without a strict schedule. However, keeping an open mind has always been important to me, so despite reservations, I went on to the admissions visit with my mom and sister. A few days later I walked into my new life at The Circle School.

The first month was an adjustment for me. I had to make peace with the fact that if I wanted to learn something, it was on me. It was frustrating, and I often beat myself up for “not getting anything done.” There was pressure coming from so many friends and adults in my life. Everywhere I turned, it seemed someone else was asking me “what classes are you taking?” and I couldn’t find a way to answer them. I felt like I was so behind everyone academically, and that I wasn’t getting anything done.

That feeling changed as I slowly began to stop doubting my progress, and started making friends and joining corporations. I was feeling more content and confident — not just in how I acted, but in my hobbies, too. I gained confidence in my ability to get up on a stage and sing in a band, and even explored instruments that weren’t my vocal cords. My real pride is my art though. The school’s structure allowed me to spend as much time as I desired on my art. I was able to explore different mediums and styles I wouldn’t have otherwise had the time to. Now I’m comfortable enough to share my art all over social media and have even done a few commissions.

By my third year, my days were filled only with activities and meetings I was passionate about. I became the chair of Art Corporation. I scribed for Judicial Committee. I started a small math class with some other students, and was involved in many others. Some days all I did was hang around with friends, which taught me how to interact with many different kinds of people.

In conventional school, I didn’t get to talk to my teachers like equals because “the adults always know better”. Frankly, it’s intimidating. At The Circle School, I talked to all the staff members as friends and peers. As a result, we were able to have real conversations and a mutual respect for one another.

In the middle of my third year, my mom received news of a family emergency in Oregon. Since the start of my journey at The Circle School, we had moved three times already, so we were sick of it, as anyone would be. No one wanted to leave, but family called, so we left. All I could think of was returning for my senior year. While I was having a wonderful time with Oregon friends and family, it was devastating not being able to see the people I thought of as family at The Circle School. It took being away to truly appreciate how much it meant to me.

So when the beginning of what would be my senior year rolled around, I went back on my own. At first, I had no idea where I was going to stay or how I was going to make it happen, but something in my gut said it needed to. Thankfully, my mom and I had done lots of networking while at the school and there was overwhelming positivity and support for me to return. We found a family close to the school who offered me a room, and on weekends I spent time with another wonderful Circle School family on their farm.

Throughout the spring, amongst many other things, six other students and I were planning our commencement. I had also started learning guitar to perform a song at the Spring Gala, and was planning a huge trip to the west coast with a few friends for when the school year ended. I even became the School Meeting Chair, which was one of my senior year goals. Then COVID-19 showed up and cancelled everyone’s plans. I didn’t really understand the magnitude of it until after my mom called me one day in March and told me she was buying a plane ticket for me to come home. I thought I would be back in a couple weeks, but that did not end up being the case. I’m still here in Oregon, and miss The Circle School more than I can express.

Now that I’ve graduated three months early, I feel robbed of my last moments as a student, but I’ve learned so much. Initially, it was a struggle to motivate myself. Now, I feel confident in most everything I do, and am much better at prioritizing. That’s not to say I don’t have lazy days, or even weeks, but falling asleep on math homework isn’t a problem anymore. I’m eager to go to meetings online, and, because of the pandemic, know how to work remotely. I’m also getting much better about not procrastinating (something that was quite easy to do in conventional school). It’s been freeing to learn that you don’t have to be actively taking a class to learn something. There is evidence that people learn better when not forced, and realizing that has better prepared me for what I have planned. I don’t know what my future holds, but I’d love to go to college to pursue my art more, become a teacher, and travel the world.

Without The Circle School, I genuinely believe I wouldn’t have learned the things I did, nor would I have the confidence and certainty I have to continue being a functioning member of society. I couldn’t be happier that I got to spend all of high school at this strange place.