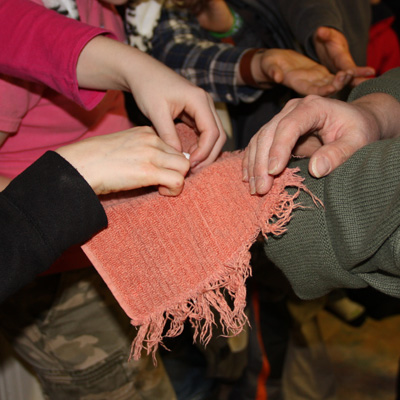 I am inspired to write a bit about the noble, humble Circle School rag.

Rags at The Circle School get used for everything from sanitizing doorknobs to soothing minor burns. They are implements of routine cleaning, but then they are also sporting goods (for Capture The Flag and Tribes), napkins, pillows, handkerchiefs, doll clothes and blankets, and dozens of yet-to-be discovered uses. They get left out in the rain, buried in the sandbox, and fatally tangled in the laundry. It’s a hard life for the rags, but one of deep service, service that is sometimes under-appreciated. A few rags suffer the ignominious fate of being thrown away instead of going into a dirty-rag bin. But veteran students know how crucial the rags are to the school’s daily function. They know that “There are no more clean rags” is the sound of a crisis erupting in slow motion. It doesn’t happen often.

Rags are symbolic of much that I love about The Circle School: rags are efficient, superior to paper towels in absorbency and cost; rags are thrifty and good for the environment – washing rags saves lots of paper towels and are a great way to reuse decommissioned bath towels; rags are multipurpose; rags are colorful – a motley collection of patterns and styles, each contributing to the carefully-organized chaos that is a folded rag bin; rags are a wonderful example of organic complexity – the rag laundering system involves at least five different chores operating independently in just-in-time fashion to get the dirty rags collected, washed, moved, dried, brought back up, folded, and distributed. Every day. It’s amazing.

Most of the rags go through the laundry five days a week, week after week, slowly being converted to dryer lint one laundry cycle at a time. It reminds me of The Velveteen Rabbit, you know, the part where the Skin Horse says “By the time you are Real, most of your hair has been loved off, and your eyes drop out and you get loose in the joints and very shabby. But these things don’t matter at all, because once you are Real you can’t be ugly, except to people who don’t understand.” I like to imagine the rags slowly becoming Real Members of the school community, until more than half of their original material has ended up in the lint trap, and they are so threadbare as to have holes in the middle, and are hardly better than a paper towel for catching spills, scarcely more than lint themselves.  But by then they are every bit as soft as baby rabbit fur, and I feel sad when I throw them away.

Because of this natural attrition (promotion?) at the end of the rags’ useful life here, every so often someone cuts up some more bath towels (donated by school families) into stacks of new, freshly minted rags. I guess if we’re waxing poetic we might imagine it’s a bit like the first day of Navy Seal training for the rags. They sit ramrod straight in perfectly-stacked formation, proud of their pristine cotton loops and full-bodied form, ready for hard duty, a duty they may not survive, but each knowing they will end up heroes either way.

Do you have some old towels that would be heroes? That have what it takes to become Real? That long for a new life as part of the noble legion of Circle School rags? Promising recruits are accepted year-round.

UPDATE: During the Pandemic in May 2020, staff parent Bridget Abbott volunteered to help clean the school building. Among other tasks, a dryer load of clean rags greeted her, which she began folding with aplomb. At some point she asked Ellen, “How many weeks worth of rags is this?” Ellen paused, laughed, then responded, “One day, Mom. One day.”