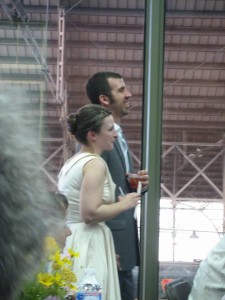 I don’t know whether to call it democratic, or maybe crowd-sourced. Either way, I have never experienced a wedding as I did on Saturday. Well, yes, I was the father of the bride, and so, no, I don’t see it through clear eyes, what with love and tears and all. But, still, the bride grew up and is on staff here at The (democracy-oozing) Circle School, and the groom is a fierce defender of liberty and democracy, so I have some cause, or at least an excuse, to crow about it in this forum.

Dusty and Julia announced their engagement on Facebook, and created a website for what looked like a self-organizing wedding from the start. They said they weren’t sending invitations but welcomed all who cared to attend. They were serious about the no-invitations thing—not even the parents of the bride and groom received one. About 135 people showed up.

The wedding and reception were a single event… in the train station, in an overlooked room overlooking tracks and trains and people and pigeons, with soot and smudge, romantic and shabby, and sleek silvery cars passing through the station’s anachronistically grand ornate architecture—reminders of the moving masses of America a century and two ago. Then there’s the jarring juxtaposition of the suburban home-bound with the urban home-less. What do railroads and train stations say about democracy? And is it good?

The bride and groom took their vows standing among the round tables of family and friends, very much embedded in their community. Weddings at their best, and this was one, are the wedding (verb, not noun) of two members by their community in public witnessing of love and love’s intentions. The witnessed love is that of the bride and groom for one another, of course, and also the love of the community for the members who are wedding and being wedded. We often think of self and society as two poles or essentially separate, but really there is only the integral whole of self IN society. It takes a whole village to wed its villagers.

The ceremony was brief, just four minutes, including ancient and noble pledges to cultivate health, righteousness, knowledge, happiness, love, trust, self-restraint, and lifelong partnership in wedlock—pledges deeply taken and felt by this bride and this groom, among villagers who share and bind the pledging, investing in a relationship and its community. My personal favorite is their commitment to “strong, virtuous, and heroic children.” I know this bride and groom can do it, especially with the help of a school committed to strong, virtuous, and heroic children.

Two minutes into the four-minute ceremony, the bride’s grandmother—my mother, who is well along in dementia—blurted “There’s just no end to this!” The bride and groom, practicing already their pledge of self-restraint, managed to hold one another’s gaze without losing it in laughter. Around the end of the ceremony the bride’s grandmother again spoke up, blurting “Well, there’s the end.” Later I learned from my sister, at my mother’s side, that both comments were unrelated to the ceremony, and referred only to the long passing train. It takes a whole village to wed its villagers, and everyone’s voice matters.

There was no photographer. Well, no, there were dozens of photographers. On each table were instructions for downloading a simple smartphone app that allowed for wedding pictures to be taken by the crowd and uploaded to a website in real time or later. The instruction card included the QR code to scan for instant download of the app. The pictures began flowing to the website, and of course to Facebook, and the flow continues now, two days later.

There was no caterer. Well, no, there were dozens of caterers. Each villager brought and shared a dish and a bottle. No caterer could possibly replicate the diversity of food that appeared, nor the passion that went into it, nor the love it expressed.

This spirit of democracy, and this event of wedding, forms around a shared vision, however vague and maybe not as shared as you thought at first, and proceeds through rallies of passion and patched solutions, sometimes sleek, often sooty and smudged. It accommodates eccentric visions and voices, fosters noble radical originality, and gives rise to grand and lasting partnership.

Because of my beloved daughter Julia from her first heartbeats and continuing even now, I have seen things, gone places, and done things I would not have imagined. Such as writing about a wedding like some social columnist or proud father. There’s just no end to this.

← Older: The Year in Pictures
Newer: Over Exposure →