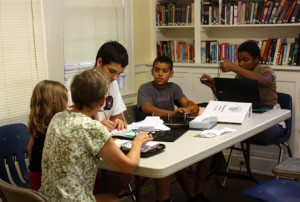 Last night our judicial team demonstrated for the school community how the wheels of justice go ’round at The Circle School. Simulating what we do every day, they investigated complaints of law-breaking—real cases from a few years ago, with names changed. The players—five judicial committee members, two runners, and numerous witnesses—were only lightly informed of the cases ahead of time, and some of their briefings were intentionally inconsistent, thus preserving the spontaneity, ambiguity, contradiction, and surprise that are so common in our judicial proceedings. One witness says it happened in the yard, another says on the front porch, neither is lying, that can’t be, but life is often like that, isn’t it? If nothing else, judicial committee members—that’s all of us here, taking turns—daily confront the woven texture of facts and stories: zoom in close enough and you find space between the threads. You discover that earthy truth is always partial.