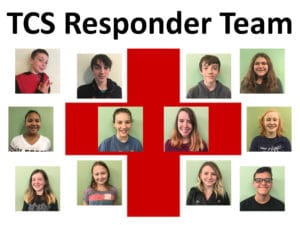 The Circle School Medical Responder Team. Cheyenne is in the upper right corner.

2019
My aunt and uncle are so cute! I was at the kitchen sink dying my hair, while they ate dinner at the kitchen table. He was holding a fork near her mouth, trying to get her to try the chicken parmesan he had made. She doesn’t need to be fed; he was just being playful. It was a huge fork-full. She giggled and said “That’s too much!” “No it’s not!” he laughed. She opened her mouth and began trying to chew, her cheeks bulging out while she tried not to laugh. I chuckled and turned back to the sink.

2015
Three years ago when I was 12, I saw a flyer for the “Medical Officer’s Response Team” at school. I had seen JD and some older kids respond to injuries, and I truly love helping people, so I signed up. Another factor that made a difference is that my uncle had recently suffered a stroke, and he didn’t let me see him for what felt like a lifetime while he got his strength back. I vowed that if it happened again, I would be able to help somehow, and not be useless. I didn’t really care how hard the training might be, I just really wanted to be able to help people, and I was pretty sure I could do it.

2019
I heard my aunt cough behind me, and when I whirled around, her laughter had turned to panic, her face an odd shade of blue. Abruptly standing up, she patted her chest and clutched her throat. My uncle looked stricken as he patted her on the back. I knew she was choking, something JD calls a “seconds-count” emergency, but my first thought was “Can I do this? If I do it wrong, my aunt will die.” My next thought was “If I do nothing, she’ll die anyway.” I swung into action, stepping behind her. I was still nervous, but I did it anyway.

2015
The Responder training was fun, especially working with the manikins. It was really long! It took months, because first we had to memorize the “Ten B’s”, ten categories of situation where we have to (by School Meeting law) call for backup from the Medical Officer. Then there was JD’s long training about documentation, an apprenticeship period, how to take off gloves properly, crowd control, and on and on. Then after that we went through the American Red Cross Adult and Pediatric training for First Aid, CPR, and AED. It was all fun, though. Klayton and I studied the training manual together, and that was fun, too. I remember when the Red Cross training said that if you are alone and choking, you can use the back of a chair to do abdominal thrusts on yourself. 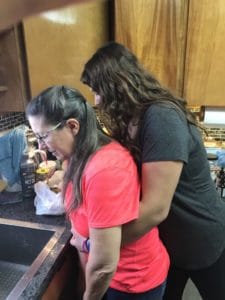 2019
I’m bigger than my aunt, so I shoved her over to the sink. Standing behind her, I put my right fist into her upper belly, pulling it sharply in and upward with my left hand, just as I had learned to do. Nothing. I did it again. And again. And again, each time feeling confident that the next one would make the difference. After four or five abdominal thrusts, she made a gross coughing sound, followed by a throwing-up sound, and a big rasping intake of breath. My aunt is too polite to just spew, but I could tell the food was still in her mouth. I whacked her on the back a few times as she continued trying to breathe and talk. Eventually, she spit it all into the sink and began to breathe normally.

I know I’m not good with vomit –- it’s one of my weaknesses as a Responder –- so I tried not to see the disgustingness in the sink. Me throwing up would NOT be helpful right now! Once I knew she was breathing OK, I stepped back. True to my family, the very next thing we did was we all made jokes about what had just happened, hysterically laughing, and recounting each step in the near-disaster. Nervous laughter, sure, but for me there was pride, too. I had saved my aunt’s life. I stepped up to get trained, I served as a Responder at school, and when the seconds were ticking away, I used my training to save the life of someone I love. It has given me a new confidence about my power to act in the world. It’s a good feeling.