Camping in the Schoolyard 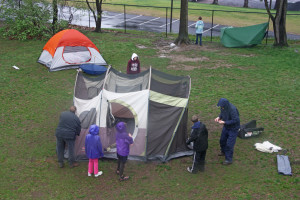 I’ve gone on many field trips this year, but week before last was the first time I went on a “field trip” without leaving the campus. It was in the school’s backyard, with ten students ages eight to fourteen, and two staff members.

Planning began in February, when members of the Natural Resources Group (NRG) went to School Meeting and got permission to hold a backyard campout. Our main goal was to practice for the big trip we’re planning to the West Coast in the summer of 2017 to view the Great American Eclipse. We presented guidelines to School Meeting and received permission to hold the campout one night during the month of April. We chose late April because we figured there would be a greater chance of warmer weather. Alas, that was not to be. The day of the campout was cool and rainy, and temperatures dipped to the low 40s overnight. 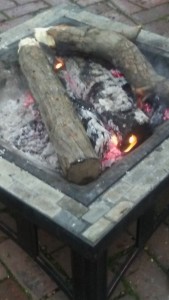 A major lesson of the evening was the importance of testing equipment before an excursion. Setting up in the rain, we discovered that our ten-person tent leaked badly. Luckily, we had a gigantic tarp in the basement that we put over the tent. The rain stopped shortly after we got the tents set up, just in time for us to build a fire to cook our dinner of hot dogs, baked potatoes, and s’mores. Students used their newly learned knife skills to whittle sticks for cooking over the fire, and we made a very satisfying dinner. Then there was much rowdy game playing in the back yard until it was dark, when everyone settled in for quieter games and stories by the fire. The evening wound down around 10:00, and we headed off to sleep.

Or try to sleep, that is. Between unseasonably cold temperatures, damp air, hard ground, and road noise from the nearby interstate, most of the group didn’t sleep very much. Nonetheless, we were up and ready to go by 6am. We cooked a filling breakfast of eggs and toast on the propane stove, washed dishes and packed our belongings, and were ready to start the school day by 8am. Whew!

For some, this was their very first camping experience. Others were seasoned veterans of camping. No matter the level of experience, we began the long road to learning how to work as a team and started to see what might be involved in a longer and more complicated trip.

Now we are planning another practice trip for this summer, this time for three days. We’re working on getting Field Trip Committee and School Meeting permission to drive to the Finger Lakes Region of New York, with a day trip to Niagara Falls and Eternal Flame Falls. As with the backyard campout, the goal is to help us get ready for the Eclipse Trip in 2017.
We’ve got a lot of work to do, but we’re very excited about it. Stay tuned for more of our adventures!